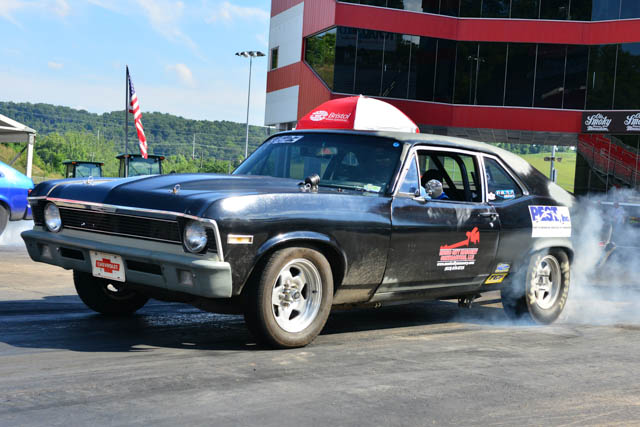 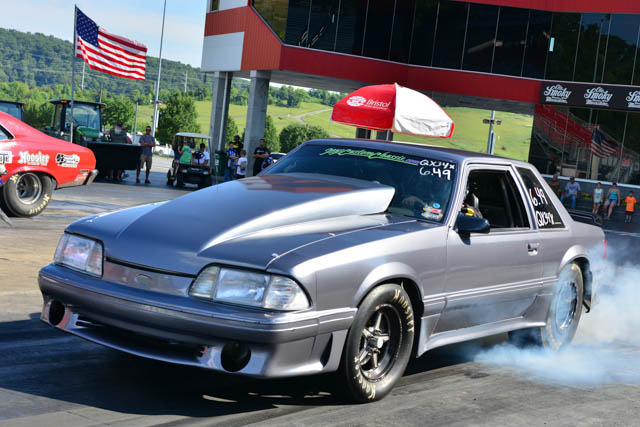 After a long day which saw Nick Hastings take home $20,000 with his win on Saturday at the BTE World Footbrake Challenge presented by Yukon Gear & Axle, it was time for Day Last which will crown another $10,000 WFC champion.

Last night’s barbeque also had the drawing for the 50/50 drawing to donate money to the St. Jude’s Children’s Hospital. All weekend Lexi Pollard collected money and the winner went unclaimed so all the money went directly to St. Jude’s. A great effort by Pollard and thanks to all who contributed to the worthy cause.

In round seven, there remained seven; seven cars and only six drivers as Richard Alford was left with two entries. He joined Saturday’s $20K winner Nick Hastings along with Brandon Waller, BJ Bell, Ryan Mangus and Billy Janousek.

First up for the quarters was Bell and Alford in his first entry. Alford spun the tires to retire his first entry but still held the odd car bye run to move him into the semifinals anyway. Waller and Hastings next did battle with Walker holding the reaction time advantage and win over “Nasty Nick.” Janousek then took out Mangus to finish off the round.

The semifinals in both pairs was a little anticlimactic as both pairs involved red-lights with Janousek and Waller the lucky recipients to make the final. 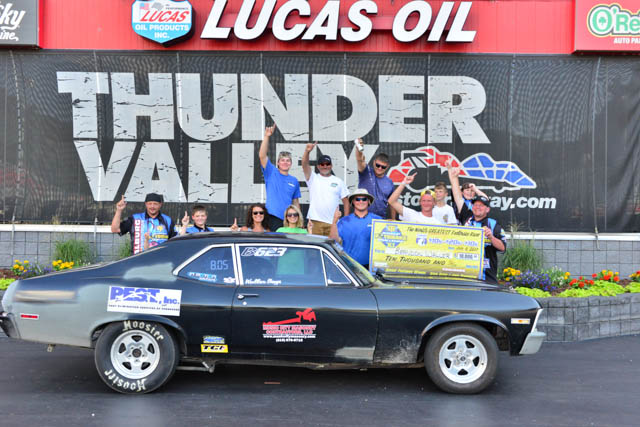 For $10,000, Waller took the handicap lead and the reaction time advantage for the win over Janousek.

“It’s just amazing,” said Waller, repeating what many of the WFC champions have said. “I know this car isn’t the best looker, but it got me here and that’s all that counts. I have to thank my brother for dialing me in all day. What a feeling.”

“We’ve had a great week here with a great staff at our host track, Bristol Dragway, and we hope we have given our racers everything they have hoped for,” said co-promotor Jared Pennington. “We can’t thank everyone enough for the confidence they had in our ability to put on a great race. The racers, the sponsors and both our Coalburg Promotions and the Bristol Dragway staff, thank you. It’s been an amazing week and we can’t wait to get back here next year for the 12th version of our event. 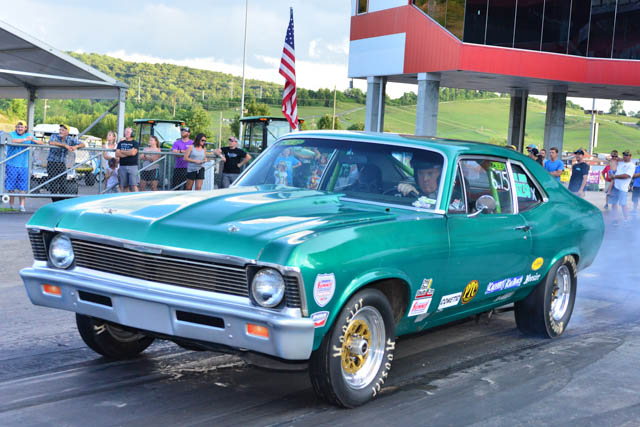 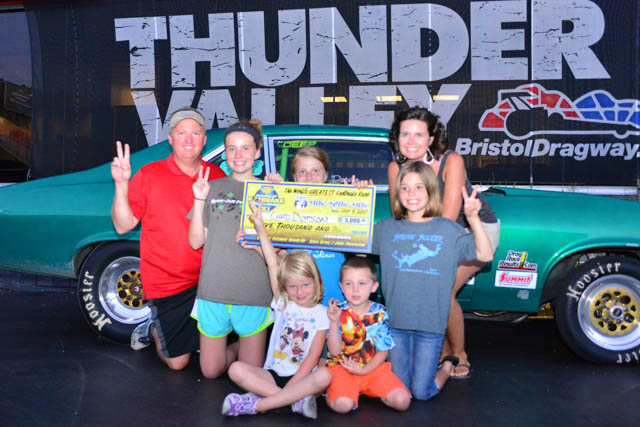 Well over 300 cars have made elimination runs so far at the BTE World Footbrake Challenge presented by Yukon Gear & Axle and today’s schedule called for another big dollar race with $20,000 going to the winner. Tonight, the Racer Appreciation Dinner took place thanks to Mountain Road Transmission and SparkPlugIndex.com. As is always the case, if you were on the property, you were invited for a great meal.

After seven and a half hours of eliminations, the seven remaining racers going into the ladder round are Josh Epperson, Dustin Mack, Rick Bear, Nick Hastings, Ernie Humes, Chad Dotson and Jake Howard. In that round, Howard took out Mack, Bauer over former WFC winner Epperson, “Nasty Nick” Hastings defeated Humes and Dotson took the odd car bye run.

In the semifinals, first up was Hastings and Howard with Howard turning on the red-light to move former WFC runner-up Hastings into his second WFC final. For the other half, Dotson, who has won his share of big events himself, left with a .030 reaction time advantage over Bauer and turned it into a win. Ohio and North Carolina respectively to battle it out to see who gets to bring the $20K check back home.

After telepathic reaction times all day for footbrake drivers, both might have said to themselves, “Don’t go red, don’t go red.” Dotson left first based on his dial-in with an .033 light while Hastings was even worse with an.051. But at the finish line, it was Hastings showing why he’s nicknamed “Nasty Nick,” because he backed off and let Dotson take the stripe, running out in the process to send the $20K back home to Ohio with Hastings.

“The amazing talent that’s here at this race and come out like this is a blessing,” said Hastings. “And to do it with my whole family here is a dream come true.” 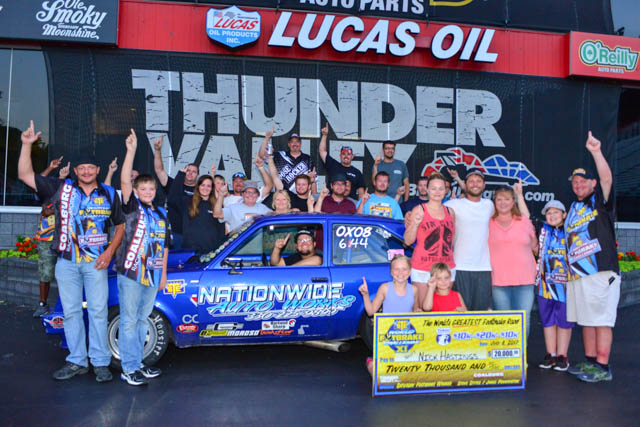 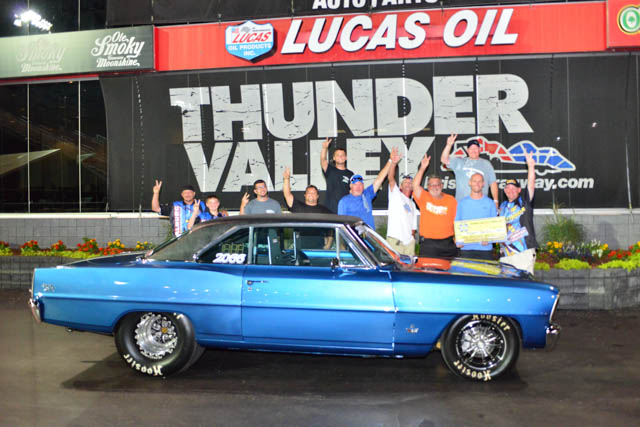 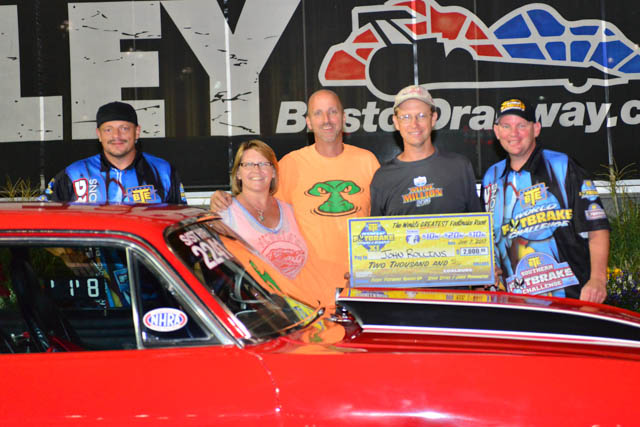 Heavy rains overnight might have dampened the track and surrounding pit areas, but it surely didn’t dampen the excitement felt by the racers at the 11th edition of the BTE World Footbrake Challenge presented by Yukon Gear & Axle.

In that quarterfinal round, Tony Mattera received the odd car bye run while his brother Bobby red-lighted to advance Holston. Finally, Hamrich defeated Davis to move into the semifinal round.

With Holston on the bye to the final, Tony Mattera defeated Hamrich to move himself into the final, where an untimely -.011 red-light by Mattera handed the win to Holston.

“I don’t know how I was doing it,” said Holston. “I was just leaving it up to God to make the runs and I give Him all the glory.” 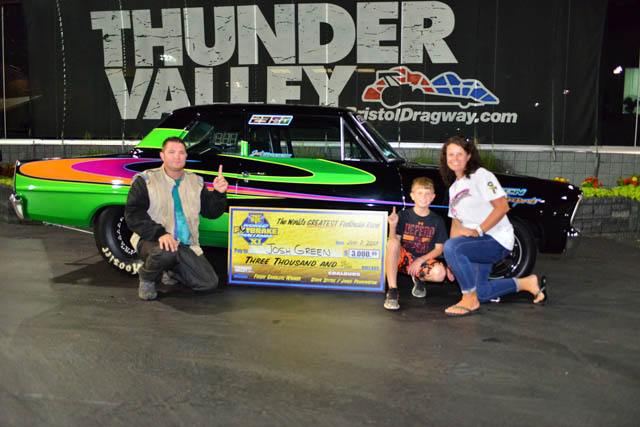 On Friday, the WFC family began to do their part to give back when 20-year old nursing student Lexi Pollard from Fincastle, Virginia, began a weekend long 50/50 drawing with the proceeds going directly to the St. Jude’s Children’s Hospital. St. Jude’s is a leading children's hospital pioneering research and treatments for kids with cancer and other life-threatening diseases. “I don’t have any connection to the hospital except I just wanted to give back,” Thompson said. “I’ve made smaller donations to them before and just felt this was an opportunity for all of us to help give.” 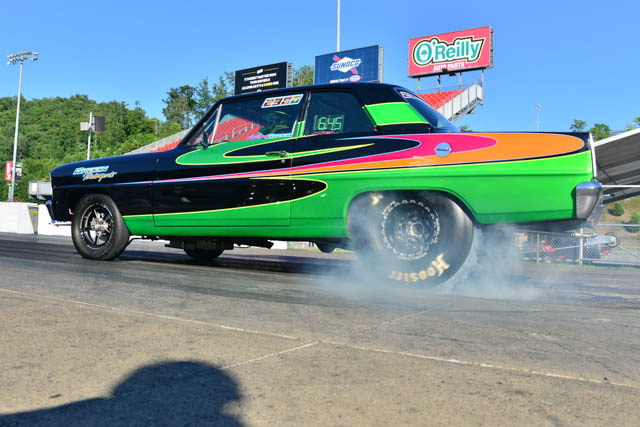 The victors in that round of seven was Bridges on the bye, Harmon, Hume and Rollins. In that semifinal of red cars, Rollins, making his first appearance at the WFC, moving to his first final by defeating Harmon. In the other half, Bridges took out perennial bracket racing winner Hume, to make it an all red Nova final round.

In the final, it was Bridges with the reaction time advantage with Rollins having to run it hard to play catch up running out in the process. Making it to the semifinals in previous years, Bridges took it one step further taking $10,000 with him back home to Beaverdam, Virginia.

Still to be completed was the Friday WFC Gambler’s Race with eliminations beginning after the seventh round of the Friday $10K race was complete. With five cars left, all five racers represented five different states. Matt Sayers turned it red to advance Adam Davis and Gage Burch also lit the red bulb to move Josh Green to the semis, while Matt Obertanec took the odd car bye run.

For the semis, Green received the bye and a guaranteed spot in the final, while Obertanec battled it out with Davis with Obertanec lighting the red-light by -.001 to make the final an all-Chevy II affair.

With two gorgeous Chevy IIs on the starting line for the final, it didn’t take long for it to be over when Davis lit the red-light, ending the night and handing the win to Green. 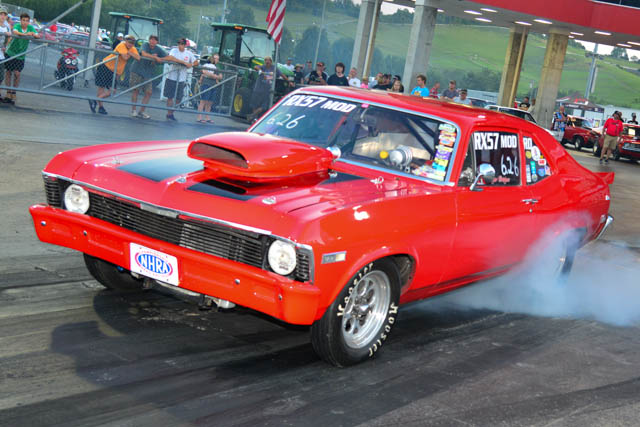 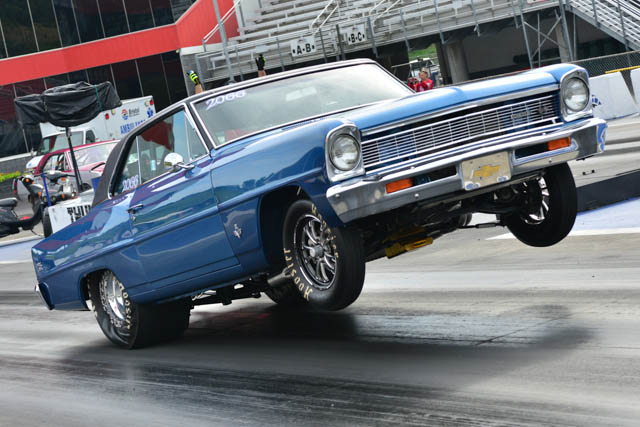 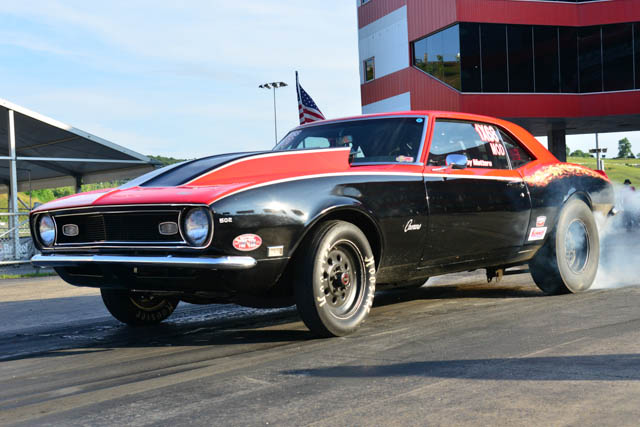 After a year of anticipation since the last BTE World Footbrake Challenge presented by Yukon Gear & Axle last year, the 11th version of the event began under cloudy skies, but nonetheless with a large field of race cars from all over the east coast.

“We’ve been working hard to prepare for the event and we’re not going to let Mother Nature get in the way,” said co-promoter Jared Pennington. “Both Steve [Stites, co-promoter] and I are extremely happy with the pre-entries and can’t wait to get this party started.”

As is custom at the WFC, at eight or less cars, each of the competitors are placed on a ladder based off their previous round reaction time. In round 5, there remained nine cars so the ladder had to wait one more round. Round 6 found the Mattera family, brothers Tony and Bobby, Jamie Holston, Adam Davis and Robert Hamrick as the remaining group of racers for the money.

Unfortunately, the wet stuff returned with a vengeance ruining the party for Thursday night. The remaining five will battle it out on Friday morning during the time trial session to crown a $3,000 winner.