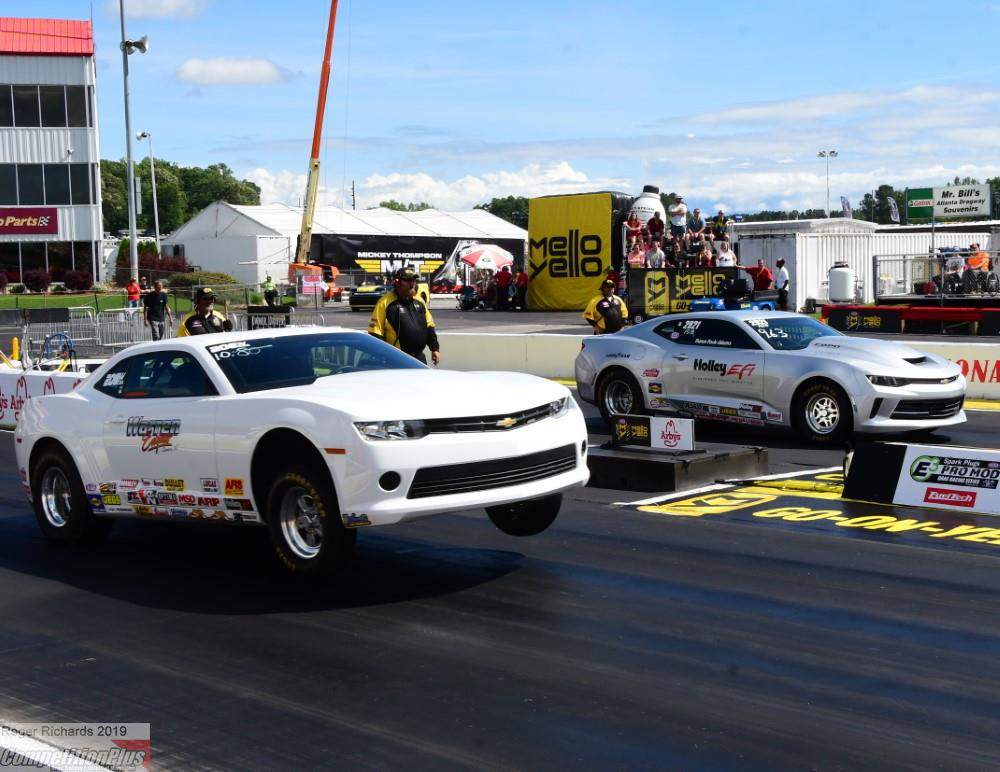 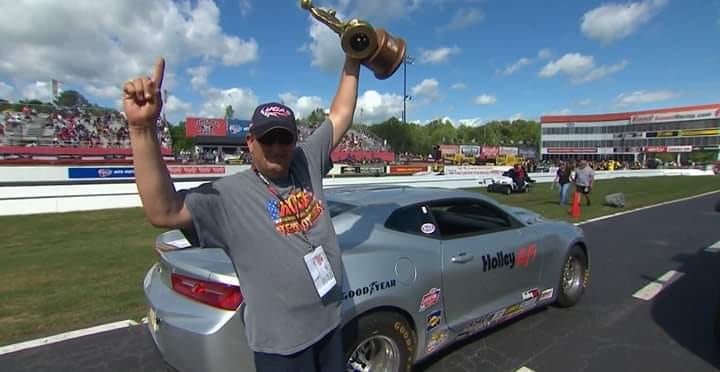 Chip Johnson made the five-hour drive from his hometown of Fayetteville, N.C., to Commerce, Ga., by himself.

He made the return trip four days later with a passenger in the front seat   —   a guy named Wally.

Johnson has been chasing money and trophies at dragstrips east of the Mississippi for nearly 40 years. It dates back to age 16, when he began bracket racing the ’73 Duster he drove to school at Westside Christian School in Laurinburg, N.C.

The second-generation racer learned to excel on the track. His list of accomplishments includes two IHRA class championships and a pair of national bracket titles. The spoils from one of those triumphs included a turn-key dragster.

But all of those successes paled in comparison to the excitement and gratification he felt May 5, when he earned his first NHRA national-event Wally. Johnson beat his teammate, Jeff Warren, in an all-North Carolina, all-COPO Camaro Stock final that matched a pair of former IHRA world titlists.

On the solo drive back home Sunday night, Johnson kept his Wally close. He placed it on the passenger seat, strapped it in with a seat belt and snapped a photo he posted on Facebook.

When he got his children on the phone, he told them, ‘I’ve got the same trophy John Force gets!”

He had finally experienced what car owner Daren Poole-Adams predicted he would if he ever took the win light in the finals of an NHRA national event. Johnson said Poole-Adams, who was competing in an NMCA race at Memphis during the Atlanta event, told him that “he started crying” when he got the news that both his drivers were in the finals.

“Jeff called him as soon as we made the run, and I called him right after I got my picture taken,” Johnson said. “It’s amazing. He told me years ago, ‘You won IHRA — you won everything they had to offer  —  but that doesn’t mean anything until you win an NHRA race. People will forget everything you did in IHRA.

“I can’t get over the response we’ve gotten from this  —  the Facebook likes, the phone calls, the text messages  —  and I’ve been doing this a long time. It’s phenomenal, that’s for sure. I just feel like the good Lord has blessed me to be able to keep doing this for this long and it finally paid dividends.

“Coming home Sunday night, it didn’t really hit me. It was like I’d been in a bracket race, which is what I told my son Chris. But then I got up Monday morning and saw 400 messages on my phone.”

Johnson’s first big splash came in 1988 when he won IHRA’s 11.90 championship. In ’99, he won the season-long battle for the B&M series’ Footbrake title. In 2010, he turned a Rockingham Dragway points championship into a divisional bracket crown, then conquered the other IHRA divisional kings in a run-off at Virginia Motorsports Park to earn the turn-key dragster. A year later, he added the IHRA Hot Rod gold to his collection

Weekday obligations, including his own vending machine business for a time, somewhat limited his long-distance travel plans. He now works as a sales rep for UniFirst, a large uniform rental company whose benefits allow him to accrue vacation hours he banks for racing. 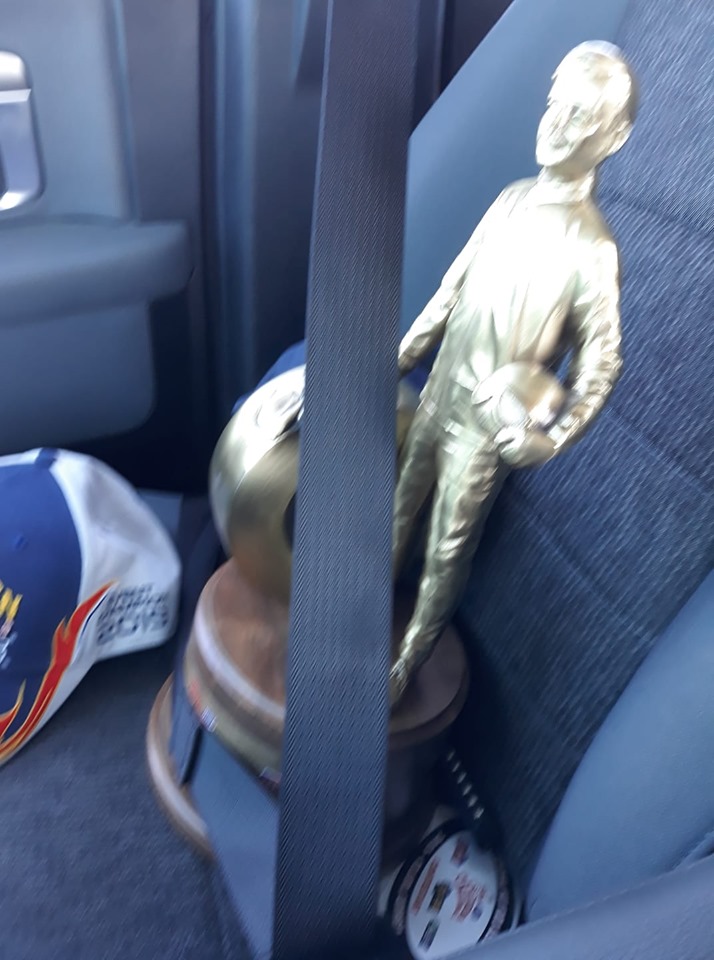 Then he began to structure his work/racing pursuits around a schedule that included a deal with Poole-Adams, who lives about 3 1/2 hours west of Johnson in Shelby, N.C.

Johnson’s early-season outings including a quarterfinal showing in Atlanta’s Lucas Oil divisional race and a first-round, .018-second red light against Drew Skillman at the Four-Wide Nationals. One week after that early exit, he outlasted the rest of the competition in his FS/B ’17 Camaro.

For the money run to come against a teammate and longtime friend made the Southern Nationals title extra special for Johnson. Both badly wanted to score their first NHRA national-event, so much so that they drew red lights -- but Warren’s infraction came first by 1/1,000th of a second.

“I went through the finish line and didn’t see the win light come on,” Johnson said. “I didn’t realized I’d won ’til I saw the time slip. We were both pushing it, and he’d been double-oh on the three the last couple of rounds. So I was thinking, ‘I’m not going to go up there and be late on the tree against Jeff,’ and the luck factor went my way for a change. He came and hugged my neck and told me congratulations. All the Warrens are good people.”

“We had quite a bit of time before the finals,” Warren said. “We’ve known each other for years, so I knew there wouldn’t be a lot of drama involved. I knew we were going to run each other straight up without any games.”

The outcome of the duel capped what Johnson described as a very unusual weekend.

“I normally never leave home on time to go to a race — I’m usually two or three hours late getting on the road — but I was on time Thursday,” he said. “I didn’t run into any road construction, no wrecks, no delays. When I got to the track, there wasn’t a line at the gate to get in, so I was able to go right in and park. I went to registration and went right through, which hardly ever happens.

“Then the weather issue came in with rain in the forecast, so they told us we were going to go ahead and run the first round Friday afternoon. I got past the first round, but then I had (four-time NHRA champion) Jeff Taylor second round and I said, ‘That’s gonna be a tough one first thing Saturday morning.’ But I got lucky and got past him, and then I thought, ‘Man, I believe I can win this race now.’ “

That, he did. But he celebrated by himself during postrace hoopla.

“We were taking the Winners’ Circle photos, and they hollered for all the crew to come on in and get in the picture.