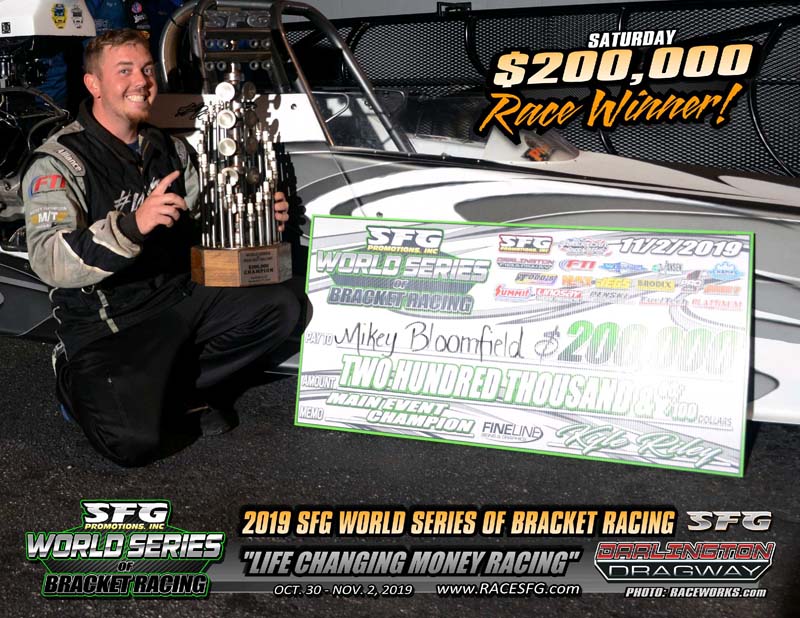 “It’s great to get out of the slump,” said Bloomfield when asked about the big win. Bloomfield then thanked his father, the Williams brothers, FTI, and Nesbitt before he admitted, “I know I’m forgetting people, I’m still- in awe of the victory.” Finally, he thanked Hank and WTR as he shouted with joy, grasping the $200,000 winners check in his hands.

The $200,000-to-win main event runner-up, Dixon, thanked his parents as he explained that they’ve had the car he drove since he was five years old. He also thanked his wife and kids, friends, Ronnie and Austin, Flowtech Plumbing, and the SFG team. “It’s a lot of money for not as much entry fee,” said Dixon before he wrapped up his interview with a special birthday shout out to his 15-year-old son, Brooks.

As racing was underway, Kyle Riley and the SFG team were dressed in their Halloween attire as they fellowshipped with racers and began judging their Halloween costume contest at the SFG “Fun Zone” canopy. The winner of the costume contest will receive a free entry to SFG’s 1.1 Million dollar race next season. Pictured below is Riley dressed as the Black Panther, alongside SFG team member, Austin Truhler, who was the last costume Walmart had on the shelf.

The SFG Breakfast of Champions, Presented by Cracker Barrel, was also hosted earlier this morning as part of SFG’s initiative to provide their racers with the best experience possible.

On the racetrack, four dragsters and four doorcars were left standing in the quarterfinals. 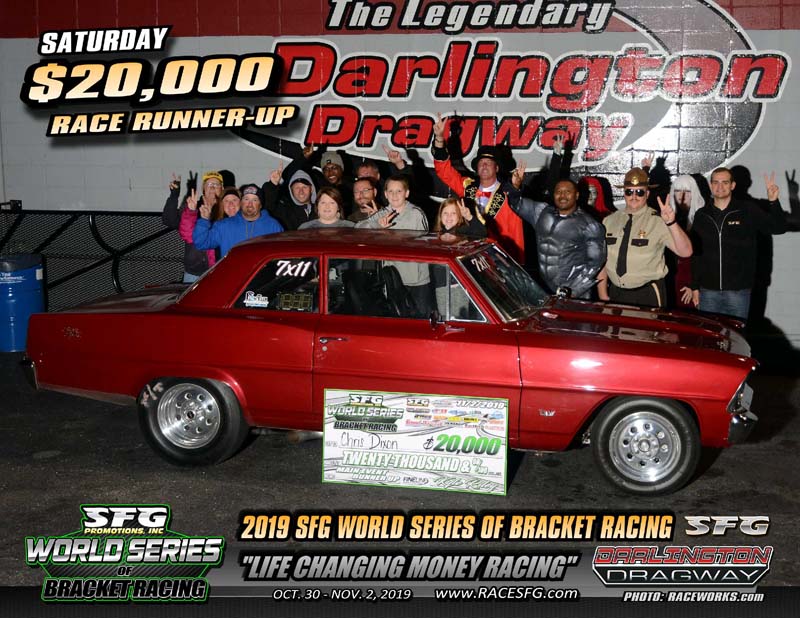 Chris Dixon and Chris Bear started off the quarterfinal round in their doorcars, as Dixon was .004 on the tree en route to a round win after Bear was .003 red.

Shortly after, Shawn Carpenter was also red on the starting line (-.004), giving the round win to Kelly Hicks.

Next to go to battle were the dragsters of Bloomfield and Tim Thomas. A slight pre-staging duel occurred between the pair as both gentlemen sat about 30 seconds at the ready line before finally bumping in. Once the tree dropped, Bloomfield went .006 on the tree, and .008 above his dial to beat Thomas’ .015 reaction time and .007 breakout run.

John Brown and Tom Dauber were the final pair of the quarterfinal round. Brown was .027 on the tree and .009 over the dial to take the win over Dauber’s .020 light and .010 breakout.

In the ninth and final round, Dixon in the door car was .007 red giving the win to Bloomfield, who was ready with a .001 reaction time.

After the $200,000-to-win race was completed, Thursday’s Fuel Tech $50,000-to-win race continued for a few minutes before SFG made the call to stop the race due to safety concerns. The race was then canceled with the purse being split between all round one and re-entry round winners as those were the only rounds completed.